The following is an extract from Arthur Mee’s ‘The King’s England, Yorkshire, West Riding, first published in 1941.

A manufacturing town with a great trade in rag and wool, it has an imposing town hall and a peace memorial with a soldier looking down on the marketplace. Holy Trinity Church, rebuilt last century, is a lofty pile looking its best outside, its great central tower crowned with a spire. The quaint little house of 1684, near Storrs Hill road, would be a familiar sight to Benjamin Ingham*, the Ossett boy who began life in 1712, became an enthusiastic member of the Oxford group known as Methodists, and was a lifelong friend of John Wesley. He was with Wesley in Georgia, but when he came back he joined the Moravian settlement near Leeds, and afterwards formed a strange religious order of his own known as Inghamites.

THE CHURCH OF THE HOLY AND UNDIVIDED TRINITY

Standing 226 feet tall and situated on a plateau some 300ft above sea level, the Church of the Holy and Undivided Trinity dramatically dominates the skyline for miles around. A large impressive church, it is an important and instantly recognised landmark in the area and was afforded Grade ll* listing in May 1988.

Ossett has been served by chapels and churches since around 1409 and this magnificent edifice replaced the original Trinity Church which had been erected in the Market Place in 1806 – which itself replaced an even earlier place of worship. The old church was largely financed by Reverend Edward Kilvington who ultimately became so big and heavy that he couldn’t get up the stairs of the pulpit. This led to the installation of a three-decker pulpit, which in reality was a primitive lift. Before the Sunday service, he got into his chair at the bottom of the pulpit steps and then the church sexton, by hauling a rope, slowly wound him up to the top level! The old church, which was said by some to have looked more like a courthouse and was described as ‘small, inconvenient and an obstruction to traffic’, was inadequate for the needs of the township; yet it was almost 60 years before a new church was provided. 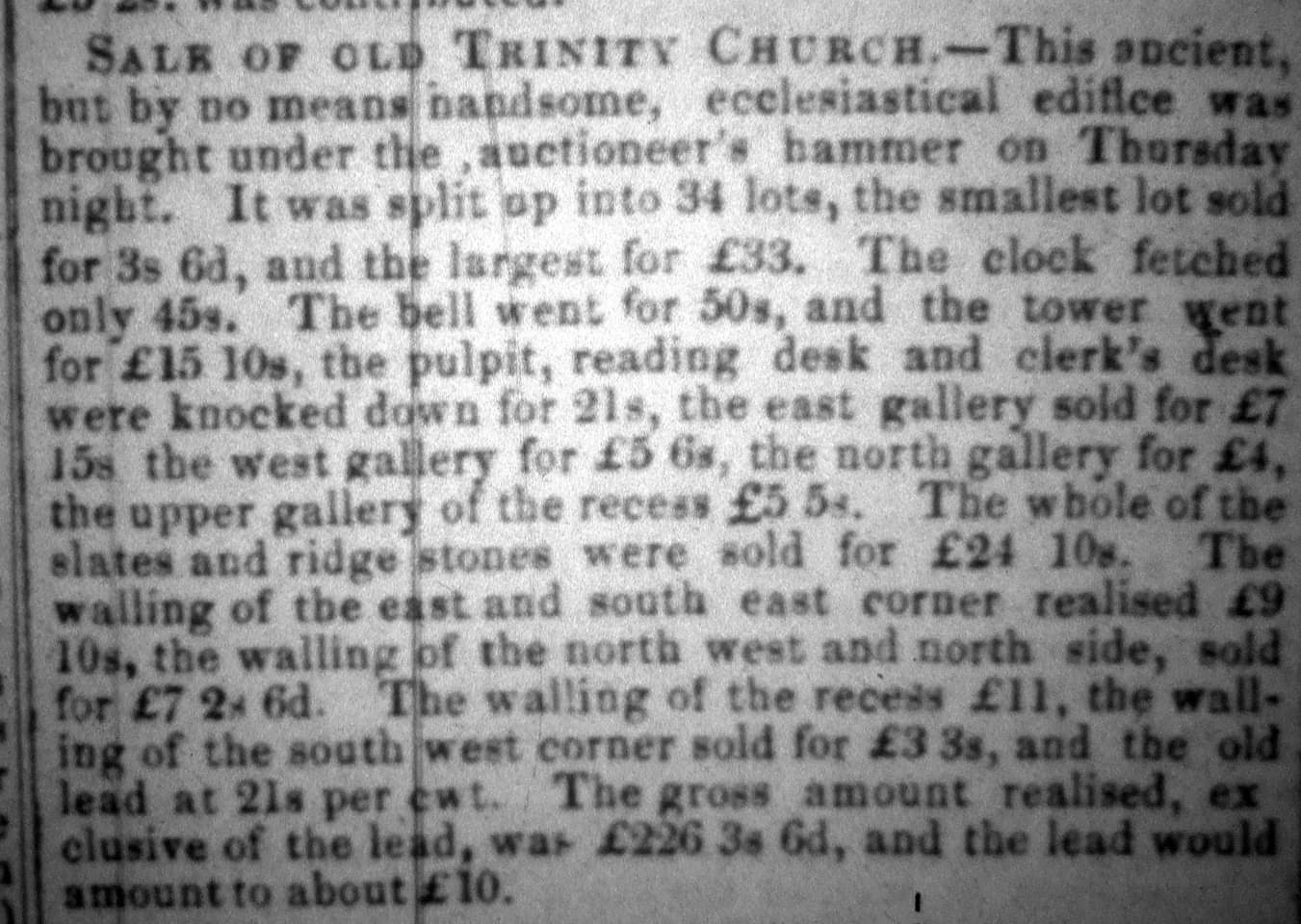 The old Chapel of Ease was sketched by JK Garlick, Ossett Borough Surveyor. To give us an idea of where it once stood Steve Mitchell has used the only photo known to exist of its demolition in 1866.

Born in Middlesex in 1825, Thomas Lee was the son of a gentleman and was said to be ’eminently suited to serving Ossett’. By the age of 28 he was the curate of St Mary’s in Bilston, Staffordshire. That same year, 1853, he married Harriet Ann Norman, the daughter of a stockbroker. Rev Lee was the first vicar of the new Holy Trinity Church.

In 1858 Ossett was declared a separate parochial district, having previously been in the parish of Dewsbury. In this year, Rev Thomas Lee was offered the living at Holy Trinity Church – but not the one with which we are familiar. This church was actually a chapel of ease and it was situated in the Market Place (still known then as Dale Street). The chapel was built in 1809 and replaced a much earlier place of worship but as the population of Ossett grew, the church became inadequate for the needs of the town and it was decided to build a new one.

In 1861 three acres of land on Field Lane was purchased and later that year a licence was obtained to use it as a burial ground. Joseph Wilson was the first burial there in December 1861 and today almost 16,000 people are buried in this graveyard which contains many Victorian monuments and 15 Commonwealth war graves. The new church was to be built on the adjacent land and subsequently the name of the thoroughfare was changed to Church Street.

Rev Lee and his wife Harriet lived in the Vicarage on Dale Street with their son, Freddy. They were also to have a daughter but sadly she died in 1874 shortly after her first birthday. She was laid to rest in the churchyard of the new Holy Trinity Church, with her father leading the burial ceremony.

In 1877 Rev Lee moved his family to Islington, where he became the Vicar of St John the Baptist until 1883. Rev Lee died in October 1892 and Harriet died the following October. Their only surviving child, Frederick Bethune Norman Lee, also became a vicar. That’s a great name already but, in 1881 he changed it to ‘Frederick Bethune Norman Norman-Lee.’ He was ordained in 1883 and became Chaplain to the Forces.

Although it would seem that the service record of Chaplain/Colonel FBN Norman-Lee hasn’t survived I can tell you that, during the years 1883 – 1899 he served at Chatham, Aldershot, the Curragh in Ireland, Nova Scotia in Canada, Gosport and Portsmouth. In the South African War of 1899 – 1901 he was chaplain to the 6th Division and took part in the relief of Kimberley and the battles of Paardeberg and Bloemfontein. As if all that wasn’t enough, he also served during WW1. Rev Frederick Bethune Norman Norman-Lee died in 1921 in Hampshire. He left a widow but no children.

The foundation stone of the new church was laid on June 30 1862 by Benjamin Ingham who was the nephew of the Ossett born Benjamin Ingham snr*; the founder of the trading dynasty of Ingham, Whitaker & Co. in Sicily. It is claimed that Benjamin Ingham snr was possibly the greatest tycoon England has ever known and when he died in 1861 he left a fortune of £12,000,000. That would now be the equivalent of more than £1 billion. He didn’t forget his Ossett roots and bequeathed £1,000 of his fortune to the Church Building Fund:- equivalent to almost £90,000 today.

The honour of laying the first stone of the new church fell to Reverend Lee. He also had the honour of being hoisted to the top of the church to lay the last stone on the steeple. He then unfurled a Union flag as a brass band played ‘Rule Britannia’!

The architect in charge, William Henry Crossland of Halifax, was a pupil of Sir George Gilbert Scott, whose Gothic Revival influence is apparent throughout. The main features include: a 226ft spire, one of the tallest in Yorkshire; a 16 bell Belfry, allowing a unique 15 bell peal; magnificent stained glass windows; an Isaac Abbott organ; an original four faced Potts turret clock; and significant Last Supper reredos, pulpit and stone carvings. Though initially estimated at £8,000, alterations and additions to the original plans meant that the final cost of construction amounted to around £16,000 (more than £945,000 today).

Such was the scale of the project that, during the consecration service of 14 July 1865, the Bishop of Ripon made reference to ‘this miniature cathedral’. Ossett stood in the Diocese of Ripon from 1836 until the Diocese of Wakefield was created in 1888. In 2014, following the dissolution of the historic dioceses of Bradford, Ripon & Leeds and Wakefield, Ossett became a part of the Leeds Diocese. Covering an area of around 2,425 square miles, and a population of around 2,642,400 people, this is one of the largest dioceses in the country and its creation is unprecedented in the history of the Church of England.

The Church of Gawthorpe St Mary the Virgin was built in 1899. It closed in 2002, largely because of diminishing congregations and a new road layout making access difficult for pedestrians. In 2007 planning permission was granted to convert the old church into a modern apartment block but this was deferred and the church stood empty for four more years. The fine old church was eventually demolished in January 2011 to make way for residential housing. The parish of Ossett & Gawthorpe was formed in 2002 with the amalgamation of Holy Trinity, Ossett and St Mary’s, Gawthorpe and Chickenley Heath and it was decided to adopt a new ‘working title’ to reflect the coming together of the two congregations. Trinity Church was decided upon, named after the church which was situated in Ossett town centre almost a century and a half earlier.

EXHUMATION OF BODIES FROM THE

Around 1969 the old Burial Ground at Dimple Wells, The Green, Ossett was bought by a builder. The bodies were exhumed and moved to Gawthorpe Burial Ground

(Supplied by the late Jean Crabtree)

More information about the Ossett Green Burials and other material can be obtained from wdfhs.co.uk